From the New York Times
Open a larger version of the following image in a popup:
Share

In 1948, Frédéric Bruly Bouabré had a vision that led him to invent a new writing system. The Museum of Modern Art explores his more than 1,000 drawings.

African art has had a place at the Museum of Modern Art from its earliest days — though not the African art you might think. In 1935, back when the museum nestled into a townhouse on West 53rd Street, the curator James Johnson Sweeney organized “African Negro Art,” whose 600 specimens included Dogon painted masks, Baoulé ivories and bangles and Congolese seats and spoons. It was one of the most popular exhibitions of MoMA’s first decade, and toured the United States.

Why were they at MoMA, and not a museum of ethnography or anthropology (or, worst of all, natural history)? Because, Sweeney maintained, these ritual objects were in fact modern art — the best modern art of the age, in fact. “As a sculptural tradition in the last century,” Sweeney proclaimed, “it has had no rival.”

Yet if MoMA could turn these objects — notably pillaged Benin bronze plaques, which the curators borrowed from German ethnographic museums — into “modern” sculpture, the anonymous Africans who made them certainly did not become “modern artists.” Even by the 1980s, with the museum’s notorious “‘Primitivism’ in 20th Century Art,” the African masks and statues that stood alongside Gauguin and Picasso were purged of their historical, legal and religious significance, without even an indication of when they were made. Only in 2002, when the Nigerian curator Okwui Enwezor brought his sweeping exhibition “The Short Century” to MoMA PS1, would living African artists enter the museum, names known and on equal footing with their Western counterparts. 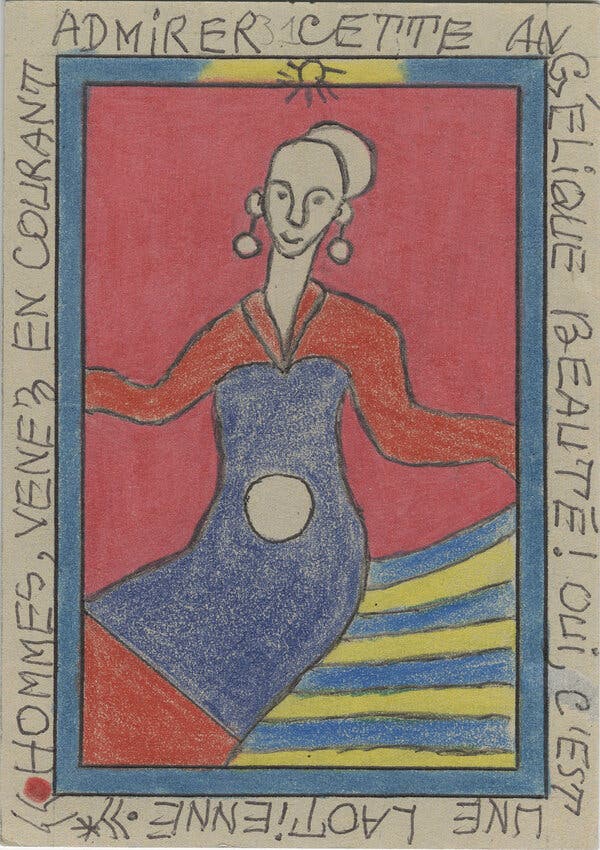 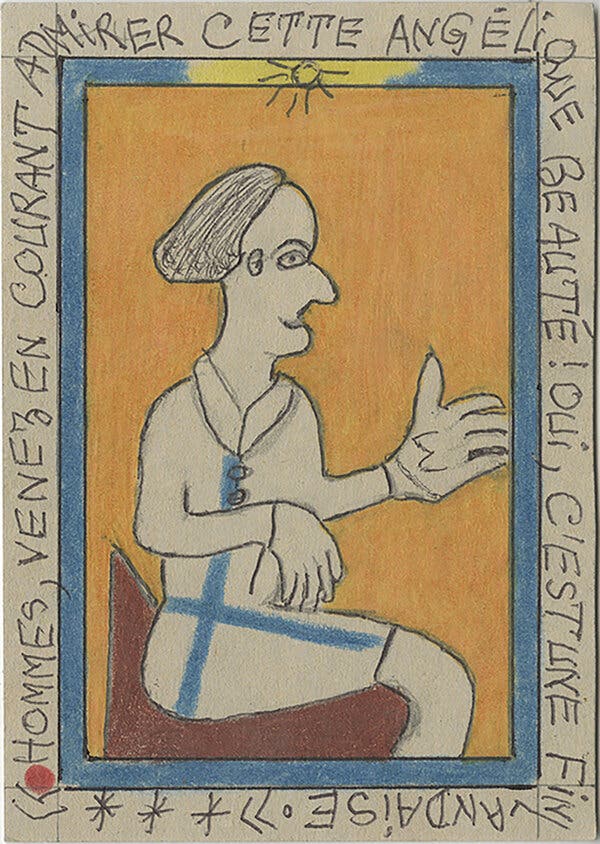 One of the artists in “The Short Century” was Frédéric Bruly Bouabré (1923-2014), an artist from Ivory Coast who celebrated universal citizenship and African history in countless small-scale drawings, as well as manuscripts composed in a writing system of his own devising. More than 1,000 of those drawings are on view now in “Frédéric Bruly Bouabré: World Unbound,” a significant new show that offers audiences a decades-long view of an expansive, persistent artist who saw writing and drawing as congruent parts of a world-spanning system of knowledge.

The show celebrates a major gift to the museum — and more on the dynamics of that in just a minute — of a sequence of Bouabré’s drawings, the “Alphabet Bété” (1991), which catalogs his life’s project of a writing system proper to West Africa but applicable for the globe. They and the other works here have been assembled by Ugochukwu-Smooth C. Nzewi, a Nigerian curator who joined the museum in 2019. The show is considered, thorough, unabashedly cross-cultural and profoundly humanist, which in these depressed days of digital-identity essentialism comes as a breath of fresh air.

Bouabré was born in a small village inhabited by the Bété people, in the west of contemporary Ivory Coast. At 18, he enlisted in the colonial navy and was posted to Dakar, then the capital of French West Africa. He stayed there after the war, entered the colonial administration — and then, on March 11, 1948, he experienced a transcendental vision. The sky opened up; seven suns danced around a central star; and Bouabré was inspired to adopt a new name (Cheik Nadro, “the Revealer”) and devote his life to the expression of celestial knowledge.

That divine spark has remained the origin point of the Bouabré mythos ever since European and American institutions began exhibiting his drawings in the late 1980s. At MoMA, eight small drawings he made in 1991 each depict a colored sun ringed with dozens of spikes, looking uncannily to a 2020s eye like a coronavirus. Yet unlike other “outsider” modernists who claimed divine inspiration (the Swedish painter Hilma af Klint, say) Bouabré was certainly not channeling into his art any messages from the spiritual realm.

The vision was more like a trigger, an impetus to look outward rather than inward. And for the rest of his life, first in writing and then in art, Bouabré would take a systematic approach to cataloging and circulating knowledge of this world and worlds beyond.

He did this first by inventing a Bété alphabet of 401 characters. (It is technically not an alphabet but a syllabary; most characters express a joint consonant and vowel, similar to the hiragana and katakana of written Japanese.) Each character is a stylized representation of a phonetically related aspect of Bété daily life, pared down to a few strokes. The sound beu is a two-handled basket; bhé is two disembodied feet. The character fo derives from a man chopping a tree. Gba is two men wrestling. 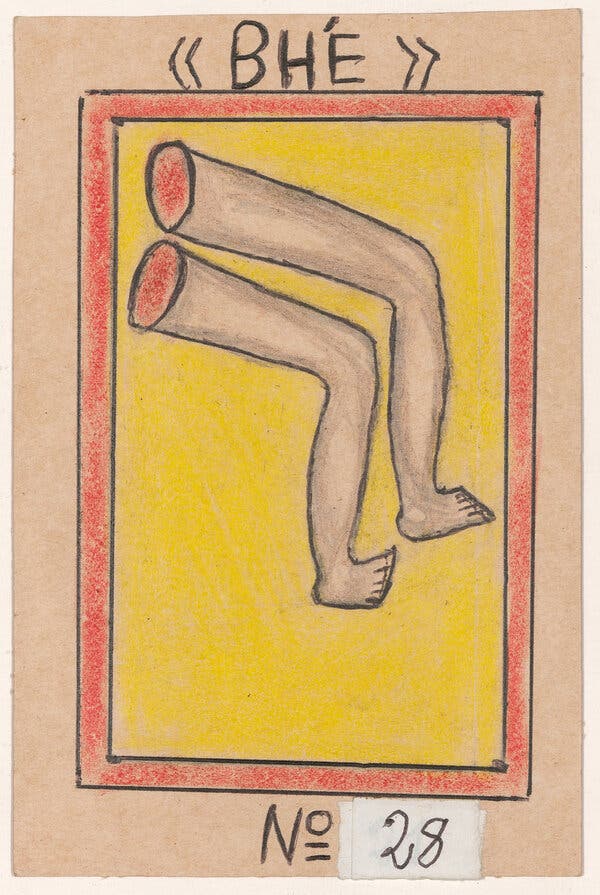 He published the syllabary in 1958, and made use of it in handwritten manuscripts both anthropological and spiritual. Later, in “Alphabet Bété,” he would make explicit each character’s derivation in his preferred medium of colored pencil on boards the size of playing cards. Arrayed here in Western alphabetical order, Bouabré’s drawings of flies and snakes, drums and vessels, display a wholeness and a conceptual savvy that “outsider art” is too often denied. They’re engrossing, though I would have appreciated English translations of the illustrated words. To the non-Bété speaker these drawings can appear hermetic, but Bouabré saw them as a method of communication that could extend across the world.

The “Alphabet Bété” sequence underscores a larger productive tension in Bouabré’s art between drawing and writing, between creation and communication, between the rational and the spiritual. (Most of Bouabré’s small drawings are ringed with captions in French, written with the Roman alphabet.)

In the series “Musée du Visage Africain” (“Museum of the African Face”), images of scarification and tattooing appear encircled with French descriptions of walled African cities or marriage and funeral rites. Late sequences celebrate democracy and women’s rights with a single drawing for each of the world’s 200-odd countries: the women’s dresses and the ballot boxes take the form of national flags, while the French captions proclaim that “democracy is the science of equality.” (I felt a small pang at the blue-and-yellow ballot box, Bouabré’s little ode to Ukrainian self-determination.) His use of written French reaffirms that Bouabré never conceived of his art, or indeed his Bété syllabary, as a private language. I think of him less as an “outsider” artist like Henry Darger or Joseph Yoakum (subject of a recent MoMA show) than an artist-writer in the manner of William Blake or Xu Bing. 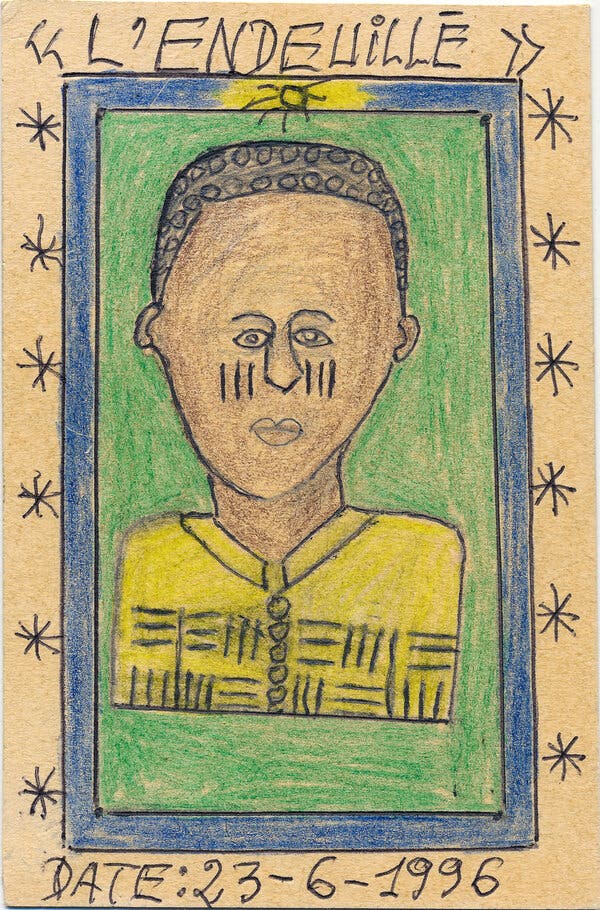 We will process the personal data you have supplied in accordance with our privacy policy (available on request). You can unsubscribe or change your preferences at any time by clicking the link in our emails.